Two Year 11 Academy students were recently chosen among other secondary school students to attend the Deakin Oration at Victoria’s parliament, which was for the first time open to students who are passionate about politics.

Isabella and Grace listened to an address by Dr Tilman Ruff AM – the first Australian Nobel Peace Prize winner – whose research into the effects of nuclear weaponry on world health has led to the establishment of the International Campaign to Abolish Nuclear Weapons (ICAN).

Dr Ruff spoke about the current climate and the political issues surrounding denuclearisation. In particular, he spoke about how the harmful fallout from a nuclear weapon would disrupt the global climate and agricultural production so severely that more than a billion people would be at risk of famine.

After the address, our students could ask questions and engage in a debate relating to nuclear proliferation. This was a truly unique experience, and while some of the information shared was confronting, it was an honour to be invited. 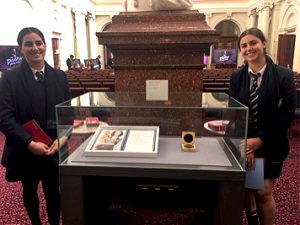