Foundation Day – 20 April 2017 – will long be remembered as the day the Academy community was invited to ‘Come and sit awhile with Ursula’, the founder of the Academy of Mary Immaculate. A large crowd, representative of many parts of the Academy community, listened to Sr Mary Moloney (Principal), Corin Powell (College Captain) and Sr Annette Schneider (Vicar, ISMAPNG) speak of the 160 year history, as well as inviting those present to reflect on the future and what it might be.

Among the highlights were the unveiling of the sculpture of Mother Ursula Frayne, the talents of music students and the cutting of the beautifully decorated birthday cake.

The sculptor, Gael O’Leary, spoke of Ursula’s journey in her reflection on the sculpture.

Throughout the day many guests, staff and students spent time ‘sitting awhile’ and admiring the magnificently crafted sculpture. 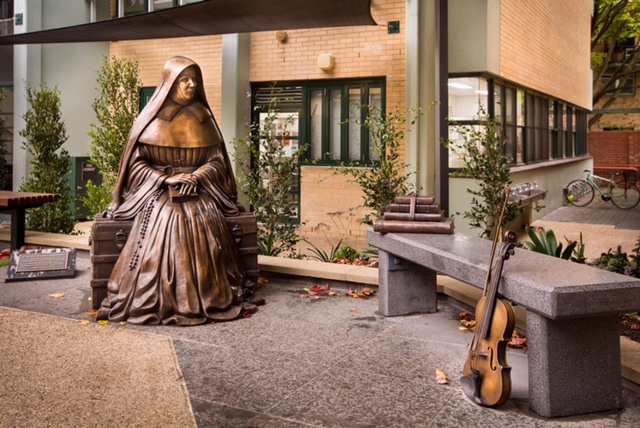 Come and sit awhile with Ursula